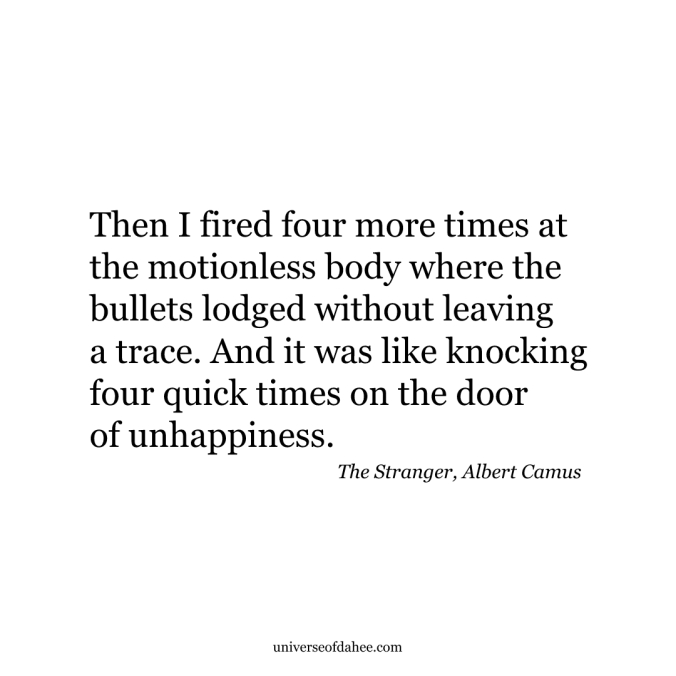 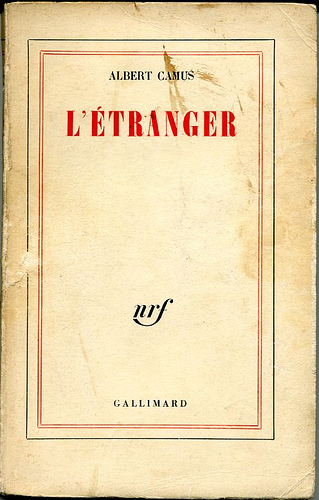 Maman died today. Or yesterday maybe, I don’t know. I got a telegram from the home: “Mother deceased. Funeral tomorrow. Faithfully yours.” That doesn’t mean anything. Maybe it was yesterday.

He looked upset and told me that I never gave him a straight answer, that I had no ambition, and that that was disastrous in business. So I went back to work. I would rather not have upset him, but I couldn’t see any reason to change my life. Looking back on it, I wasn’t unhappy. When I was a student, I had lots of ambitions like that. But when I had to give up my studies I learned very quickly that none of it really mattered.

The sun was the same as it had been the day I’d buried Maman, and like then, my forehead especially was hurting me, all the veins in it throbbing under the skin. It was this burning, which I couldn’t stand anymore, that made me move forward. I knew that it was stupid, that I wouldn’t get the sun off me by stepping forward. But I took a step, one step, forward. And this time, without getting up, the Arab drew his knife and held it up to me in the sun. The light shot off the steel and it was like a long flashing blade cutting at my forehead. At the same instant the sweat in my eyebrows dripped down over my eyelids all at once and covered them with a warm, thick film. My eyes were blinded behind the curtain of tears and salt. All I could feel were the cymbals of sunlight crashing on my forehead and, indistinctly, the dazzling spear flying up from the knife in front of me. The scorching blade slashed at my eyelashes and stabbed at my stinging eyes. That’s when everything began to reel. The sea carried up a thick, fiery breath. It seemed to me as if the sky split open from one end to the other to rain down fire. My whole being tensed and I squeezed my hand around the revolver. The trigger gave; I felt the smooth underside of the butt; and there, in that noise, sharp and deafening at the same time, is where it all started. I shook off the sweat and the sun. I knew that I had shattered the harmony of the day, the exceptional silence of a beach where I’d been happy. Then I fired four more times at the motionless body where the bullets lodged without leaving a trace. And it was like knocking four quick times on the door of unhappiness.

Suddenly he stood up, strode over to a far corner of his office, and pulled out a drawer in a file cabinet. He took out a silver crucifix which he brandished as he came toward me. And in a completely different, almost cracked voice, he shouted, “Do you know what this is?” I said, “Yes, of course.” Speaking very quickly and passionately, he told me that he believed in God, that it was his conviction that no man was so guilty that God would not forgive him, but in order for that to happen a man must repent and in so doing become like a child whose heart is open and ready to embrace all. He was leaning all the way over the table. He was waving his crucifix almost directly over my head. To tell the truth, I had found it very hard to follow his reasoning, first because I was hot and there were big flies in his office that kept landing on my face, and also because he was scaring me a little. At the same time I knew that that was ridiculous because, after all, I was the criminal. He went on anyway. I vaguely understood that to his mind there was just one thing that wasn’t clear in my confession, the fact that I had hesitated before I fired my second shot. The rest was fine, but that part he couldn’t understand.

I was about to tell him he was wrong to dwell on it, because it really didn’t matter.

Shortly after that was when she wrote to me. And the things I’ve never liked talking about began. Anyway, I shouldn’t exaggerate, and it was easier for me than for others. When I was first imprisoned, the hardest thing was that my thoughts were still those of a free man. For example, I would suddenly have the urge to be on a beach and to walk down to the water. As I imagined the sound of the first waves under my feet, my body entering the water and the sense of relief it would give me, all of a sudden I would feel just how closed in I was by the walls of my cell. But that only lasted a few months. Afterwards my only thoughts were those of a prisoner. I waited for the daily walk, which I took in the courtyard, or for a visit from my lawyer. The rest of the time I managed pretty well. At the time, I often thought that if I had had to live in the trunk of a dead tree, with nothing to do but look up at the sky flowering overhead, little by little I would have gotten used to it. I would have waited for birds to fly by or clouds to mingle, just as here waited to see my lawyer’s ties and just as, in another world, I used to wait patiently until Saturday to hold Marie’s body in my arms. Now, as I think back on it, I wasn’t in a hollow tree trunk. There were others worse off than me. Anyway, it was one of Maman’s ideas, and she often repeated it, that after a while you could get used to anything.

There were the cigarettes, too. When I entered prison, they took away my belt, my shoelaces, my tie, and everything I had in my pockets, my cigarettes in particular. Once I was in my cell, I asked to have them back. But I was told I wasn’t allowed. The first few days were really rough. That may be the thing that was hardest for me. I would suck on chips of wood that I broke off my bed planks. I walked around nauseated all day long. I couldn’t understand why they had taken them away when they didn’t hurt anybody. Later on I realized that that too was part of the punishment. But by then I had gotten used to not smoking and it wasn’t a punishment anymore.

Apart from these annoyances, I wasn’t too unhappy. Once again the main problem was killing time. Eventually, once I learned how to remember things, I wasn’t bored at all. Sometimes I would get to thinking about my room, and in my imagination I would start at one corner and circle the room, mentally noting everything there was on the way. At first it didn’t take long. But every time I started over, it took a little longer. I would remember every piece of furniture; and on every piece of furniture, every object; and of every object, all the details; and of the details themselves – a flake, a crack, or a chipped edge – the color and the texture. At the same time I would try not to lose the thread of my inventory, to make a complete list, so that after a few weeks I could spend hours just enumerating the things that were in my room. And the more I thought about it, the more I dug out of my memory things I had overlooked or forgotten. I realized then that a man who had lived only one day could easily live for a hundred years in prison. He would have enough memories to keep him from being bored. In a way, it was an advantage.

Between my straw mattress and the bed planks, I had actually found an old scrap of newspaper, yellow and transparent, half-stuck to the canvas. On it was a news story, the first part of which was missing, but which must have taken place in Czechoslovakia. A man had left a Czech village to seek his fortune. Twenty-five years later, and now rich, he had returned with a wife and a child. His mother was running a hotel with his sister in the village where he’d been born. In order to surprise them, he had left his wife and child at another hotel and gone to see his mother, who didn’t recognize him when he walked in. As a joke he’d had the idea of taking a room. He had shown off his money. During the night his mother and his sister had beaten him to death with a hammer in order to rob him and had thrown his body in the river. The next morning the wife had come to the hotel and, without knowing it, gave away the traveler’s identity. The mother hanged herself. The sister threw herself down a well. I must have read that story a thousand times. On the one hand it wasn’t very likely. On the other, it was perfectly natural. Anyway, I thought the traveler pretty much deserved what he got and that you should never play games.

If I ever got out of this prison I would go and watch every execution there was. But I think it was a mistake even to consider the possibility. Because at the thought that one fine morning I would find myself a free man standing behind a cordon of police – on the outside, as it were – at the thought of being the spectator who comes to watch and then can go and throw up afterwards, a wave of poisoned joy rose in my throat. But I wasn’t being reasonable. It was a mistake to let myself get carried away by such imaginings, because the next minute I would get so cold that I would curl up into a ball under my blanket and my teeth would be chattering and I couldn’t make them stop.