To sense the universe at all scales, from the vast distances to the stars down to the unimaginably small distances within the atomic nucleus, requires that we expand our senses by the use of instruments. Telescopes enable us to look outwards and microscopes reveal what things are like at small distances. To look inside the atomic nucleus requires special types of microscope known as particle accelerators. By the use of electric fields, electrically charged particles such as electrons or protons are accelerated to within a fraction of the speed of light and then smashed into targets of matter or head on into one another. The results of such collisions can reveal the deep structure of matter. They show not only the quarks that seed the atomic nucleus, but have also revealed exotic forms of matter with whimsical names – strange, charm, bottom, and top – and seemingly heavier forms of the electron, known as the muon and tau. These play no obvious role in the matter that we normally find on Earth, and it is not completely understood why Nature uses them. Answering such questions is one of the challenges currently facing us.

Although these exotic forms are not prevalent today, it appears that they were abundant in the first moments after the Big Bang which heralded the start of our material universe. This insight has also come from the results of high-energy particle experiments, and a profound realization of what these experiments re doing. For 50 years the focus of high-energy particle physics was to reveal the deep inner structure of matter and to understand the exotic forms of matter that had unexpectedly shown up. In the last quarter of the 20th century there came a profound view of the universe: that the material universe of today has emerged from a hot Big Bang, and that the collisions between subatomic particles are capable of recreating momentarily the conditions that were prevalent at that early epoch.

Thus today we view the collisions between high-energy particles as a means of studying the phenomena that ruled when the universe was newly born. We can study how matter was created and discover what varieties there were. From this we can construct the story of how the material universe has developed from that original hot cauldron to the cool conditions here on Earth today, where matter is made from electrons, without need for muons and taus, and where the seeds of atomic nuclei are just the up and down quarks, without need for strange or charming stuff.

In very broad terms, this is the story of what has happened. The matter that was born in the hot Big Bang consisted of quarks and particles like the electron. As concerns the quarks, the strange, charm, bottom, and top varieties are highly unstable, and died out within a fraction of a second, the weak force converting them into their more stable progeny, the up and down varieties which survive within us today. A similar story took place for the electron and its heavier versions, the muon and tau. This latter pair are also unstable and died out, courtesy of the weak force, leaving the electron as survivor. In the process of these decays, lots of neutrinos and electromagnetic radiation were also produced, which continue to swarm throughout the universe some 14 billion years later.

The up and down quarks and electrons were the survivors while the universe was still very young and hot. As it cooled, the quarks were stuck to one another, forming protons and neutrons. The mutual gravitational attraction among these particles gathered them into large clouds that were primaeval stars. As they bumped into one another in the heart of these stars, the protons and neutrons built up the seeds of heavier elements. Some stars became unstable and exploded, ejecting these atomic nuclei into space, where they trapped electrons to form atoms of matter as we know it. That is what we believe occurred some 5 billion years ago when our solar system was forming; those atoms from a long-dead supernova are what make you and me today. 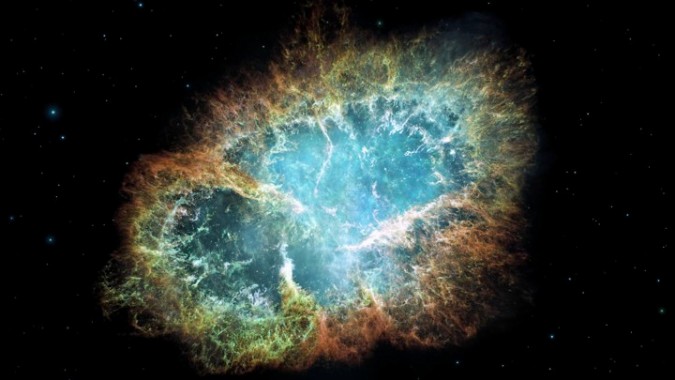 The brightest supernova explosion by NASA

What we can now do in experiments is in effect reverse the process and observe matter change back into its original primaeval forms. Heat matter to a few thousand degrees and its atoms ionise – electrons are separated from the central nuclei. That is how it is charged electrons and protons swirling independently. At even higher temperatures, typical of the conditions that can be reached in relatively small high-energy accelerators, the nuclei are disrupted into their constituent protons and neutrons. At yet higher energies, these in turn ‘melt’ into a plasma of freely flowing quarks.

A neutrino is a subatomic particle that is very similar to an electron, but has no electrical charge and a very small mass, which might even be zero. Neutrinos are one of the most abundant particles in the universe. Because they have very little interaction with matter, however, they are incredibly difficult to detect. Nuclear forces treat electrons and neutrinos identically; neither participate in the strong nuclear force, but both participate equally in the weak nuclear force. Particles with this property are termed leptons. In addition to the electron (and its anti-particle, the positron), the charged leptons include the muon (with a mass 200 times greater than that of the electron), the tau (with mass 3,500 times greater than that of the electron) and their anti-particles.

The muon (/ˈmjuːɒn/; from the Greek letter mu (μ) used to represent it) is an elementary particle similar to the electron, with an electric charge of −1 e and a spin of 1/2, but with a much greater mass. It is classified as a lepton. As is the case with other leptons, the muon is not believed to have any sub-structure—that is, it is not thought to be composed of any simpler particles.

The muon is an unstable subatomic particle with a mean lifetime of 2.2 μs, much longer than many other subatomic particles. As with the decay of the non-elementary neutron (with a lifetime around 15 minutes), muon decay is slow (by subatomic standards) because the decay is mediated by the weak interaction exclusively (rather than the more powerful strong interaction or electromagnetic interaction), and because the mass difference between the muon and the set of its decay products is small, providing few kinetic degrees of freedom for decay. Muon decay almost always produces at least three particles, which must include an electron of the same charge as the muon and two neutrinos of different types.

Some particles, such as the photon, are their own antiparticle. Otherwise, for each pair of antiparticle partners, one is designated as normal matter (the kind all matter usually interacted with is made of), and the other (usually given the prefix “anti-“) as antimatter.

Particle–antiparticle pairs can annihilate each other, producing photons; since the charges of the particle and antiparticle are opposite, total charge is conserved. For example, the positrons produced in natural radioactive decay quickly annihilate themselves with electrons, producing pairs of gamma rays, a process exploited in positron emission tomography.

The laws of nature are very nearly symmetrical with respect to particles and antiparticles. For example, an antiproton and a positron can form an antihydrogen atom, which is believed to have the same properties as a hydrogen atom. This leads to the question of why the formation of matter after the Big Bang resulted in a universe consisting almost entirely of matter, rather than being a half-and-half mixture of matter and antimatter. The discovery of Charge Parity violation helped to shed light on this problem by showing that this symmetry, originally thought to be perfect, was only approximate.

Because charge is conserved, it is not possible to create an antiparticle without either destroying another particle of the same charge (as is for instance the case when antiparticles are produced naturally via beta decay or the collision of cosmic rays with Earth’s atmosphere), or by the simultaneous creation of both a particle and its antiparticle, which can occur in particle accelerators such as the Large Hadron Collider at CERN.